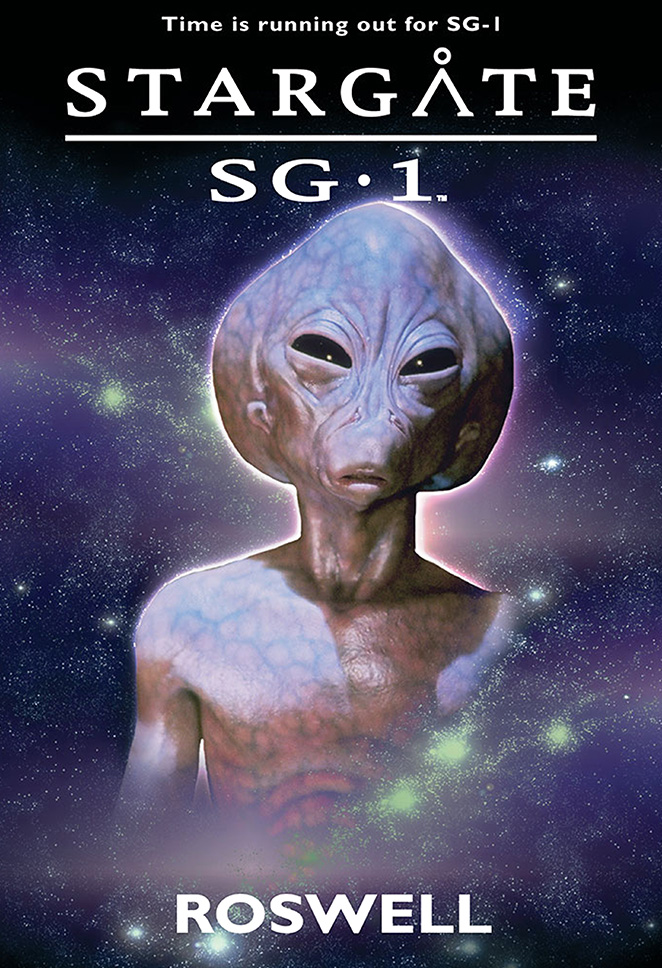 When a Stargate malfunction throws Lieutenant Colonel Cameron Mitchell, Dr. Daniel Jackson. Lt. Colonel Sam Carter, and Teal’c back in time, they only have minutes to live.

But their rescue, by an unlikely duo – Major General Jack O’Neill and Vala Mal Doran – is only the beginning of their problems. Ordered to rescue an Asgard also marooned in 1947, SG-1 find themselves at the mercy of history. While Jack, Daniel, Sam and Teal’c become embroiled in the Roswell aliens conspiracy, Cam and Vala are stranded in another timeline, desperately searching for a way home. As the effects of their interference ripple through time, the consequences for the future are catastrophic.

Trapped in the past, SG-1 can only watch as their world is overrun by a terrible invader…

Stargate SG-1: Roswell includes all of the original SG-1 team plus Vala and Mitchell. The title is self explanatory – and if it’s not, what planet are you from? So, all I’m going to say is that I spent several months re-reading more accounts of this saga than is good for one’s sanity, managed to pick up a copy of the Roswell Daily Record newspaper for June 7 and 8, 1947, and the recording of the real life radio broadcast announcing a ‘flying disc’ had been recovered by the Army Airforce:

Having the team romp through ground zero of the most enduring mystery – or myth – of the twentieth century was way too much fun, especially because I could bring two of the twentieth century’s much-loved spec fic authors – HG Wells and HP Lovecraft (who could rightfully be called the father of the Stargate mythos) – along for the ride.

As with any story, much of the first draft ends up on the cutting room floor. Scroll down to see a deleted portion of the scene in the diner in Roswell, New Mexico, 1947.

Carefully injecting only minimal interest in his voice, Jack said, “And…?” Too much enthusiasm and he’d get the entire history of the Egyptian pyramids. Again.

“Don’t you see? The discovery of Tutankhamen’s tomb—while not necessarily the most significant—was, and still is, the most famous of the Egyptian finds. His funerary mask became iconic, as, too, have the countless tales of impropriety and the largely fictional ‘curse of the mummy’.”

“Yeah, I get that, Daniel,” Jack said. “Teal’c made me sit through that movie five times.”

Carter returned and slid into the seat beside Daniel.

An abandoned section of the paper caught her interest. She pulled it closer. Jack only wished that he’d thought of the same strategy, because Daniel was off and running. “Which one?”

“Which movie? Hollywood thrived on a story about the curse begun by a French historian named Christianne Desroches-Noblecourt and propagated by Sir Arthur Conan Doyle.” He glanced around to check there was no danger of being overheard. “Admittedly the curse—Anubis’s doing by the way—had some basis in fact, besides the obvious problems we’ve encountered opening tombs, because five members of Carter’s original team were dead within two years.”

“Actually, I was talking about the pharaohs’ curse.”

Pretending he hadn’t heard the remark, Daniel continued to speak. “Fear of the supposed pharaohs’ curse led to hysteria so far reaching that by 1928,  there’d been a US Senate investigation into the safety of Egyptian mummies in the United States.”

Daniel nodded. He was getting way too excited about this. “The result of the investigation saw most US held mummies promptly donated to the British Museum.”

One of the flies returned, fat and lazy, buzzing around their plates. Jack batted it away while Daniel fell into lecture mode. “It was an amazing period in history. Museums and wealthy philanthropists were literally buying concessions to excavate Egypt in the archeological equivalent of a gold rush. Lord Carnarvon wasn’t a professional Egyptologist, but he hooked up with someone who was, Howard Carter. In those days there were no antiquity laws, so Carnarvon, who was pretty much Carter’s walking ATM, amassed the most extensive and valuable private collection of Egyptian artifacts in the world. Still, he didn’t have the one thing that he really wanted.”

“Theodore Davis’s concession to the Valley of the Kings,” Daniel said without missing a beat. “In 1915, just six months before he died, Davis abandoned those rights believing that there was nothing more to be found. Jack, this is pivotal to the entire Stargate program.”

That got his attention. “Okay, but can you at least make it the abridged version? One more lecture about Egypt and I will have to cause you pain.”

Outside, a couple of old Buicks and a dust-covered Dodge pickup trundled by, windows wound down low in deference to the stifling mid-afternoon heat. While Packard may have been offering air conditioning in their automobiles since 1940, he doubted it would be commonly seen in New Mexico for another fifteen-twenty years.